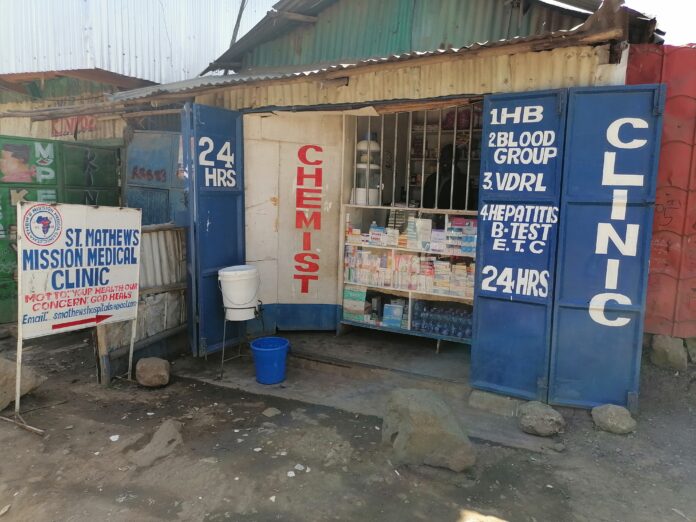 Riverside village in Mukuru Kwa Reuben has all the markings of a ‘responsible’ neighborhood. It has a school, partly tarmacked, a hospital, social hall and radio station among others. Though part of the densely populated slum, the village has these facilities close by, that would be a heaven to many. The roads within are equally well-spaced.

It is here that I meet Christopher Owiny who walks around likes a colossus. His dark complexion is caressed with snow-white teeth but his calm demeanor, height and reserved nature, lends locals to say he works for intelligence. He heartily laughs over this and has no problem with the tag, if anything he wouldn’t want to be anywhere else.

His Chemist, Mathews Mission Medical Clinic also has a pharmacy where we meet for a chat. In the about half an hour we engaged, two out of five people who visited called ‘Daktari’ (Doctor). He is a clinician so this is quite accurate and he patiently speaks to each, then after the sale, records the transaction.

“I am passionate about helping people and so medicine was a natural career choice, although early one, I actually hoped to join the intelligence”, he jokes.

Chris who calls himself a risk-taker is very big on health education. He is authoritative that this is what separates him from four other clinics in the neighborhood. He therefore does not see them as competition. He is very contented.

The facility can receive up to 100 people per day, but this also depends with whether they have electricity or not. It is a big challenge for him and generally a reality in such residential areas where due to illegal electricity connections, there is no reliable energy to power homes and businesses.

“Health education is about having a relationship with people. You speak to them on any matter they have including counselling, family issues, preventive measures and causes of the ailments that are afflicting them. In this, confidentiality is a big one, which many professionals lack in Kenya”, he notes

In doing the health education, he does not charge and admits this could be reason clients flock to him, which he converts to business and helps retain them. He however charges for clinic, diagnostic and pharmaceutical services.

The Mukuru kwa Ruben Slum (also known as the Mukuru community) was born in Nairobi’s Industrial area over 40 years after independence when people began to build make-shift homes near the factories they worked in. The area now has a population of over 700,000 and many families live in corrugated iron shacks measuring 10 x 10 feet. Many of the slum dwellers in Mukuru work as casual laborers in the manufacturing industries situated close to the slum. It is adjacent to Industrial area.

Other than Riverside, other villages in Mukuru kwa Reuben include Kwa Njenga, Lunga Lunga, Sinai, Kingstone, Kayaba and Fuata Nyayo.

At the facility, he has an observation room and other medical equipment but is limited with good facilities. The structure is in a mabati house, which limits his ability to attract more services like using NHIF for payments since they see this as a safety risk. It also has its sanitation realities.

He has tried to move to a permanent structure but these are very few in the area and those that come up are taken up fast before completion. He is also reluctant to move elsewhere considering the client base he has build and strategic location he is based. Security is also excellent in the area and this is a big consideration for him.

It is one year since he received them and is grateful that he is now able to better dispense quality health services. He only mourns his ability to do more due to electricity challenges.

Today, the equipment helps him take patients for observation who can stay for longer hours.

He is also part of Mathews Mission Community Based Organization (CBO) who periodically do free medical and community sensitization in the area. The CBO has 20 members who come in from time to time when needed.

The journey for him started in Tanzania where he studied clinical medicine, then ran a pharmacy in Kibra in 2019 before moving to Mukuru Kwa Reuben.

“Revenues are consistent here and we are able to grow slowly, develop the facility and pay dues we owe. We would certainly be far ahead if we had reliable electricity since we would serve more people consistently. But we are grateful where we are and look forward to helping more people in time”, he quips.