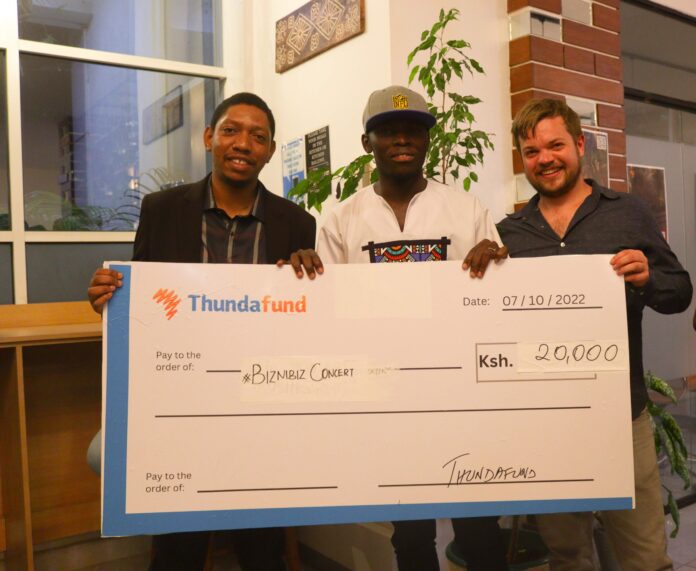 Mombasa-based artist Jane Nkatha heard about crowdfunding through an artists’ group on social media. ‘I didn’t even know if I qualified’, she says, ‘but I just thought, “why not?” I applied to [crowdfunding platform] Thundafund, and a few days later I got a call.’

As an up-and-coming artist who had just held her first exhibition, crowdfunding was especially important to her. ‘I really embraced crowdfunding because I did my first exhibition last month, which was quite mind-blowing for me,’ she explains. ‘That exhibition really made me go for Thundafund, because I knew I needed the money, and I needed a platform that could help propel me closer to my dream.’

In the days since her campaign launched, Jane has raised over Ksh167,000, enough to buy paints, canvases and a camera to continue creating artwork depicting her home city of Mombasa.

Jane is one of several Kenyan creatives, innovators and entrepreneurs turning to crowdfunding to launch their creative projects. As of 2016, the African crowdfunding market was worth US$182 million, according to the Cambridge Centre for Alternative Finance. However, forecasts now show that that figure could reach US$2.25 billion by 2025. ‘When most Kenyans talk about raising funds, they talk about getting a loan’, explains Matt Roberts Davies, CEO of crowdfunding platform Thundafund. ‘The costs of these can be prohibitive for most creatives and start-ups. Crowdfunding allows businesses to raise funds that don’t need to be repaid.’

Matt Roberts Davies noted that early momentum is extremely important in crowdfunding. “Without it, project creators tend to procrastinate until the end and raise less funds. Every campaign actually follows a U shape whereby their most active times for fundraising happen at the beginning and end.”

Twenty-six campaigns were involved, including artists, filmmakers, software developers and law firms, and collectively they raised over Ksh3.8 million in three days from 400 contributors. The winning campaigns were announced at a special award ceremony at Jenga Leo, Westlands on the 7th of October, the evening also providing an opportunity to network, and build a sense of community amongst creatives and entrepreneurs in Kenya.

The winners of the competition were legal firm E-sheria, who produce software that helps law firms to manage their casework more effectively.

‘Our cloud-based systems are designed to improve efficiency in the management of law firms in Kenya’, says E-Sheria business lead Ekesa Austin.

‘At E-sheria, we believe that efficiency in the management of the law firm will translate to enhanced access to justice more so in rural Kenya. For this reason, we have partnered with law firms in marginalized regions and with firms that advocate for women’s rights, children’s rights, and climate change by offering then our service for free.’

E-sheria conducted a smart and effective crowdfunding campaign that has so far raised Ksh1,548,429. “We had already begun conversations with a lot of people [before the campaign launch]”, explains E-sheria co-founder Franklin Oshiri. They were able to produce a ‘sticky campaign’ and share it widely. Franklin hopes that E-sheria’s success will encourage other Kenyan entrepreneurs to try crowdfunding.

Retelling the African Story as one of success and creativity

Following the success of the first crowdfunding awards, Thundafund will soon be launching a range of initiatives to help Kenyan creatives fulfil their crowdfunding potential. Some of these include networking events, mentorship and brand building.