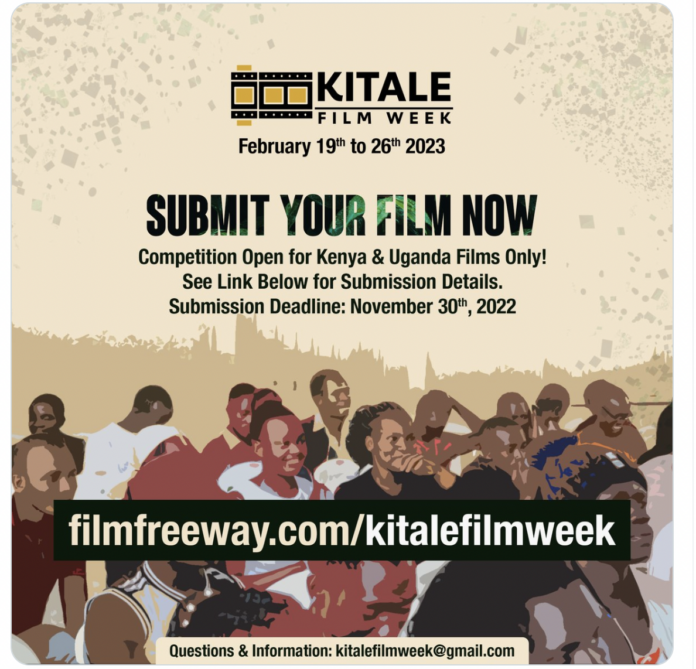 The Kitale Film Week has officially opened its call for submissions of films for its maiden event scheduled for February 2023, the festival director Peter Pages Bwire has announced.

The Kitale Film Week is a week-long film festival seeking to position film as a strategic factor for sustainable development in Trans Nzoia.

The festival organizers include young men and women born and bred in Kitale, some of whom have worked at the top of the film industry in Kenya and abroad.

The main events in the festival include film screenings that have been integrated with conversations on key community issues and are moderated by local filmmakers and students from Kitale. The school film events geared towards developing filmmakers and film critics from primary and secondary school level; filmmaking workshops with top industry professionals seeking to develop socially engaged filmmakers locally.

There is also an ambitious short film fund which the festival hopes can help two projects by upcoming local talent to get produced in Trans Nzoia.

It also involves a competition for top awards which is only open to Kenyan and Ugandan filmmakers, to enhance artistic collaboration between western Kenya and Kampala. Short films from Trans Nzoia and the North Rift are curated in collaboration with the Eldoret Film Festival. Future plans include an extension of the festival to South Sudan filmmakers, and a further integration of community development issues in the film spaces, and a push to get Kitale to become a UNESCO creative city for film.

The film week, a seven-day festival that will take place in Kitale, Trans Nzoia, seeks to curate strands of cinema for the cosmopolitan audiences of Trans Nzoia, giving prominence to the voices of the North Rift and Western Kenya.

It also features a competition that will be open only to Kenyan and Ugandan films, as the organizing team seeks to build industry relations between the two countries.

The competition is led by Kenyan film producer Wangui Ngunjiri, with support across the border coming from Ugandan film executive Joel Tugaineyo.

“It is a pleasure for us to be able to open this window. The growth of our film industry and our towns will not happen without the effective participation of filmmakers. Our hope is to get as many Kenyan and Ugandan films submitted,” Ngunjiri said on the opening of submissions, which are to be received on the online portal Film Freeway under the event title “Kitale Film Week”.

A festival jury is expected to be announced in late October.

The idea of a film festival in Kitale comes at a time when the new county governor, George Natembeya has expressed his determination to improve tourism to the county. Some of the biggest festivals in the world such as Cannes, Toronto, Venice, and Busan have defined cities and countries, and invited significant attention to the offerings of the cities they are situated in. Kitale Film Week seeks to continue this trend by creating a cinematic spectacle at the heart of Trans Nzoia County.

“We are not just about screening films. This festival will have lots of storytelling from local people, food and trips to some of the most amazing but relatively unknown places in Trans Nzoia. We are also running workshops for screenwriters, film editors and directors and, if all goes well, a short film fund to support our storytellers to make a leap into filmmaking,” Bwire said.

The festival kicks off its pre-festival programme this September with outdoor screenings of Biko Nyongesa’s comedy feature, “Get Some Money (2017)”, seeking to introduce the event to the rural communities of the county. Nyongesa is himself a Trans-Nzoia native who has directed other films such as “Napunyi (2020)” among others. Deadlines for festival submissions are set for the end of November while calls for applications for workshop participants will be announced in due course.

Kitale Film Week is born out of the belief in the power of cinema and heritage, and on the backdrop of successful film events in Kitale and elsewhere in Kenya by the organizing team, which has previously planned and managed the Festivals of Dots (2016, Nairobi) and The Hip Hop Film Festival (2018, Nairobi). Bwire also launched the award-winning short film, ‘RAISED’ in Kitale, in March 2022 which was well attended by an enthusiastic crowd.

Filmmakers can submit their films via Filmfreeway here.