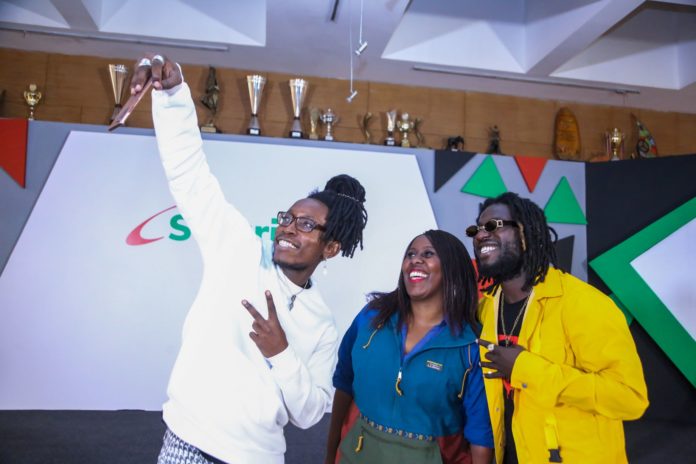 Safaricom has announced a Ksh1.5 million sponsorship towards the D.O.P.E Campus Tour that has been organised by Sol Generation.

The seven-leg tour, which is delivered in partnership with Trace East Africa and powered by ABSA, seeks to reach youth in over 15 campuses across the country. It will include a musical extravaganza headlined by the label’s Nviiri the Storyteller and Bensoul, and an engagement tour where the artists and thought leaders will interact with students through short masterclasses.

Peter Ndegwa, the Safaricom CEO said that it is their hope that by the end of the tour, they will have transformed the lives of Kenyan youth by showcasing to them the transformative power of the internet, drawing from how Sol Generation has been able to leverage online platforms to grow their popularity in Kenya and beyond.

The tour seeks to break down the “microwave to success culture” by spotlighting the artistes as a blueprint to success guided by Sol Generation’s values of discipline, order, passion, and excellence (D.O.P.E) to hone their crafts.

“True to Sol Generation’s mantra, we know the youth can be roosters; never late, never lazy, and always working hard. We are happy to on-board a youth-centric brand like Safaricom, who are always keen to inspire the youth to follow their passions and empower them as they journey towards success,” said William Nanjero, General Manager – Sol Generation.

The tour now moves to its fourth leg in Nairobi on Friday 8th July at Strathmore University following successful editions held at Moi University in Eldoret, Mount Kenya University in Thika, and last weekend’s edition at the Technical University of Mombasa which drew campus students from Mombasa and its environs. Future editions of the campus tour include Nakuru, Meru, and Kisii, with the dates set to be announced on Sol Generation’s social media pages.

In addition to the Ksh1.5 million sponsorship, the telco will also provide in-kind support in the form of communication, merchandise, and airtime towards making the tour a success.