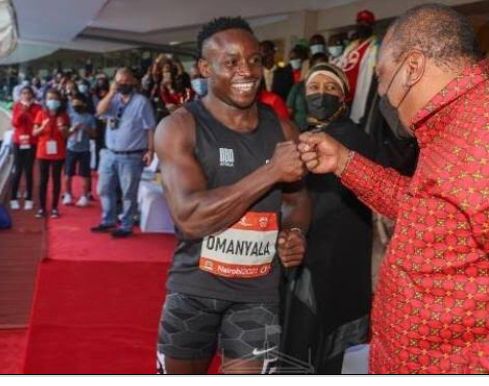 Two firms have disserted African record 100m holder Ferdinand Omanyala in what is opening a lead to backroom controversies.

A law firm that handled his doping case has terminated its contract with the athlete.

In a statement, DBA Africa added “we are proud to have played a huge role in enabling him to compete around the continent, resulting in attaining four qualifying times for the Tokyo Olympic Games and achieving many nation records and personal bests.”

Apart from gaming firm OdiBets, Omanyala said he is yet to seal any other deal.

SNOLEGAL Sports and Entertainment Law firm indicated in a statement that it had withdrawn their legal representation for Omanyala, who is now ranked second in the world this year in 100m. He also recently posted the eighth fastest time in history.

Sarah Ochwanda, who is the Principal Counsel at the law firm, said her firm provided Omanyala with legal, reputation management, Intellectual property management, PR and Communications services up until September 7 when they made a unilateral decision to cease representing him.

“We have not been involved in his decision-making since then and we commend our team for the tireless work they have done for Omanyala, which continues to bear fruit,” said Ochwanda.

A key issue they dealt with was doping issues that he had in 2018. Omanyala was banned for 14 months by the Anti-Doping Agency of Kenya (Adak) after he tested positive for a banned substance on September 17, 2018.

“This was through high-level lobbying which led to Omanyala’s admission into the Olympics team, in setting up his initial communications and PR channels, in mediating and negotiating for fair and meaningful sponsorship opportunities,” explained Ochwanda.

But she was quick to add that it’s time to leave in order to allow Omanyala the space to grow and take charge of his own destiny.

Omanyala set a new African Record of 9.77 seconds when he finished second behind American Trayvon Bromell (9.76) during the Absa Kip Keino Classic on September 18, this year.

In a separate story carried by Nation Sport, Omanyala said he opted out of the DBA Africa deal since the sports firm was not registered with World Athletics.