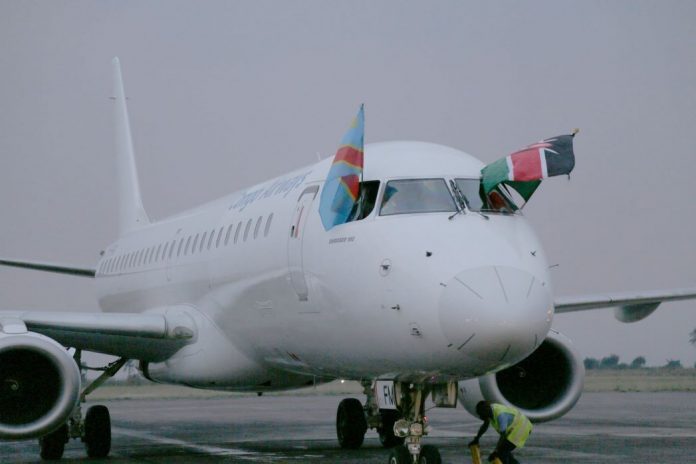 Kenya Airways (KQ) has delivered one of two Embraer E190 jets to Congo Airways in the Democratic Republic of Congo (DRC) as it seeks to reduce operational costs from the unused planes.

The delivered follows a signed lease agreement as part of their ongoing partnership to strengthen bilateral ties and boost passenger and cargo operations.

Joining the KQ delegation to hand-over one of the airplanes was KQ Group MD and CEO Mr. Allan Kilavuka. He handed it over to the Prime Minister of the DRC His Excellency, Mr. Jean-Michel Sama Lukonde, the Minister of State Portfolio Her Excellency Madam Adele Kanyinda, other Government officials, members of the Diplomatic Corps, and Mr. Pascal Kasongo, CEO of Congo Airways.

KQ also launched cargo operations between Johannesburg and Lubumbashi, in the Democratic Republic of Congo.

Allan Kilavuka said “Cargo has provided new opportunities in the face of the pandemic and we are keen to continue building our operations and leveraging partnerships.”

“The partnership strengthens collaboration and bolsters aviation ties between Kenya and Congo, actualising the memorandum of understanding between the two African airlines signed in April”, the airline noted.

In July this year, the Kenya Airline Pilots Association (KAPA) asserted that the airlines’ Embraer fleet is not optimized for a majority of the profitable regional routes in contrast to the Boeing 737 multi-purpose passenger aircraft that has an optimized cargo carrying capacity and mooted for their replacement.

Kenya Airways is seeking to leverage the Congo market by diversifying its export destinations, given the COVID-19 induced disruption, which has highlighted the need for deeper inter-regional trade.

Last month, KQ reported a net loss of Ksh11. 49 billion over the last six months to June 2021. This was however an improvement from Ksh14. 33 billion that the airline reported over a similar half in 2020.

Five areas you can outsource

Bolt riders to fuel at RUBiS at discounted Ksh4 per liter