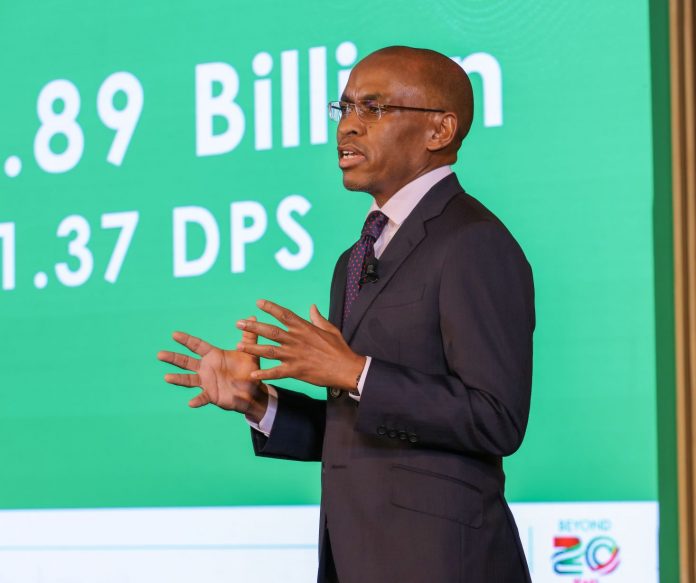 Service revenue recorded a marginal decline of 0.3 percent to close at sh250.35 billion, during a tough economic period.

The revenues were driven by double-digit growth in mobile data business, which grew by 11.5 percent YoY to sh44.79 billion.

Safaricom CEO Peter Ndegwa said they remained resilient in a disruptive year, demonstrating strong operational capacity, diligence and commitment in supporting the country, their customers and shareholders through this uncertain time.

Earnings/profit Before Interest and Tax delivering ahead of guidance at sh96.16 billion.

M-PESA accounted for 33.0 percent of the total service revenue down from 33.6 percent last year, impacted by the waiver of the Peer-to-Peer (P2P) transactions fees.

To support Micro and Small Medium Enterprises (MSMEs), the company introduced the Pochi la Biashara, M-PESA Business App, Bill Manager, Merchant Transacting till and Self On-Boarding process. Safaricom has also announced that the consumer M-PESA App will be launched in quarter one of the current financial year.

Commenting on the future of the business, Ndegwa noted “Despite a tough financial year, the company is committed to investing in the business and maintaining a consistent dividend payout ratio in line with our dividend policy. Our guidance for the Financial year 2022 is at the range of sh105 – 108 billion for Earnings Before Interest and Tax and Capital Expenditure guidance in the range of sh40-43 billion.”

The company recorded a 5.3 percent YoY decline in EBIT (Earnings before Interest and Tax) to sh96.16 billion with an EBIT margin of 36.5 percent.

Its service revenue contracted by 0.3 percent to sh250.35 billion

The M-PESA revenue dropped by 2.1 percent YoY to sh82.65 billion

The total one-month active customer base increased by 9.9 percent to 31.45 million