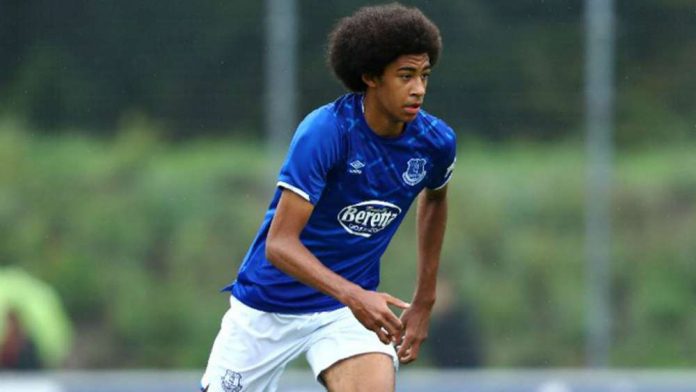 Tyler Onyango has received England under 18 call up, marking a milestone in his career. The midfielder is 17 years has been with Everton since eight years.

In October last year, Everton promoted him to their U23 side and he made his debut as The Toffees drew 1-1 with PSV Eindhoven in the Premier League International Cup.

Tyler has featured four times for the England U17 national team but is yet to play for the senior team and is therefore eligible for selection by the Kenyan National team, Harambee Stars.

It is however unclear whether Harambee Stars or the federation has ever made contact with him about playing for the national team.

Everton describes him as a skillful, athletic midfielder, who reads the game well and boasts impressive stamina.

Born in Luton, England he signed a first professional contract in July 2020, penning a three-year deal with Everton which ends in June 2023.

The 6ft 3 inches player has been described as “an absolute machine in terms of his physicality so he catches your eye straight away”, by his Under 18 coach Paul Tait.

Tyler is born to a Kenyan father and British mother and has previously indicated that he wouldn’t mind playing for Kenya.

He told Nation Sports that although he cannot speak Swahili or Luo, “I am eligible to play for Kenya and it is definitely something I’d be open to as you never know what the future holds so I want to keep my mind open to any opportunities that may occur.”

Tyler Onyango has been featured in eight Premier League starts for the Under 18 category, netting 2 goals and assisting one goal.