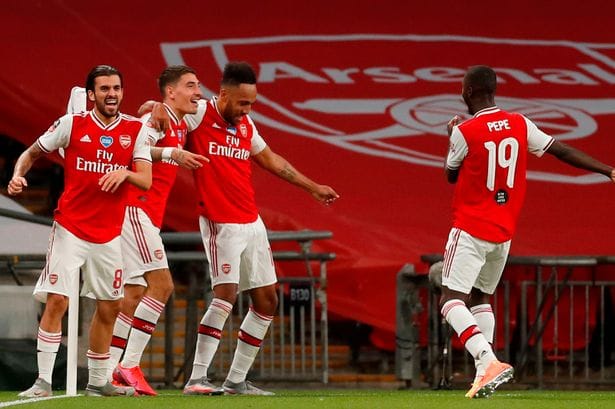 Victories against big teams are not things we normally associate with Arsenal.

But since Arteta joined in December, Arsenal have beaten Manchester United, Liverpool and most recently Manchester City.

The last victory had an element of revenge in it given the fact that City totally demolished Arsenal when the teams met a month ago.

The tactics give more perspective to how the game was played, Arteta stuck to his preferred 3 -4-3 formation.

City started the game fast trying to exploit gaps behind the Wingbacks with left back Benjamin Mendy finding space for numerous crosses.

It got to a point where Arsenal was boxed in and could not find an outlet. Until the actions of one man proved decisive in breaking the pressure. This was none other than Nicholas Pepe, who used his superb left foot to switch play to the opposite side of the pitch, creating attacking overloads on the left side for Arsenal.

Every time Pepe Switched play in the first half, Ainsley Maitland Niles and Pierre Emerick Aubemayeng found themselves 2 on 2 vs Eric Garcia and Kyle Walker.

This unsettled city and their right flank ended up being the reason the conceded the first goal, this time after a calm interception by Xhaka started off a team goal with 10 players touching the ball before it was swirling in the back of the net, Pepe cutting in to lay the assist for Aubameyang to volley it in.

Xhaka continued his immense shift in the middle of the park with great passing, his first misplaced pass in the whole game came after the 70th minute.

In the second half, Arteta tweaked the formation a bit more, making it a 3-5-2 with Aubamayeng and Lacazette upfront then later with Willock when the Frenchman was subbed off.

This closed off the midfield and denied Kevin De Bruyne space to work his magic. Raheem Sterling was frustrated by his duel with Hector Bellerin who is Arsenals best defender in 1v1 situations and Gabriel Jesus could not find space in between the three Arsenal Center Backs.

The game illustrated Manchester City’s need for Sergio Aguero’s ruthless spark as the Argentine is known for making chances out of nothing.

The second goal was another exhibition of counter attacking football. Tierney putting Aubameyang clean through behind a helpless Eric Garcia and the Arsenal captain did the rest by slotting the ball through Ederson’s legs.

It was a team effort by Arsenal and this was the most important factor as they played with immense energy for all 98 minutes of the contest. Mikel Arteta will now look to the last two games of the Premier League season before playing the final in two weeks’ time.