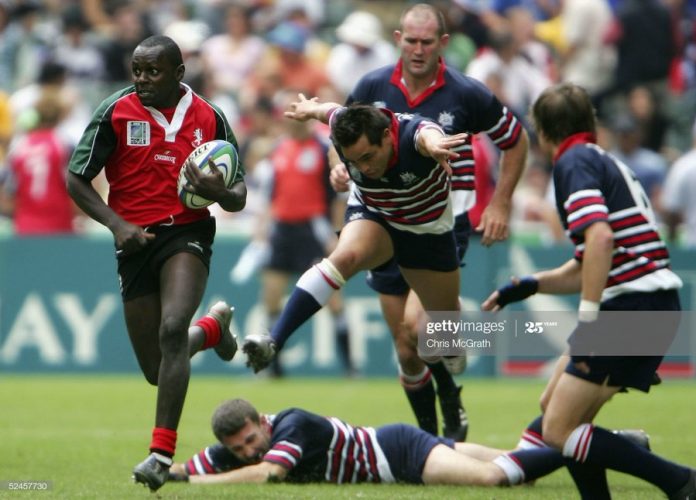 Kakamega is mourning. Bamahalia are writhing in pain.

One of its illustrious sons to have put the County on the Kenyan and international maps will no longer be sharing his smiley and affable character with them, among others.

The Makaka name is prominent in the town due to a former Mayor, Morgan Makaka who was also a Councilor. They come from Imahalia clan, Mukhonje village in Shinyalu Constituency and considered relatively wealthy, by the local standards and by all means based on their livelihoods.

It is at Musingu High School that Allan Makaka honed his rugby skills. There from 1997 to 2000, he would terrorize fellow students with compatriot school Kakamega High School feeling his impact. His face was unmatched and would arguably be the faster Rugby player Kenya has ever seen.

“He was a person who told you as it is. A very supportive individual to friends and family as he always contributed when there was need for funeral or weddings”, said Allan Maleche, was was with him for the entire four years at Musingu.

He added that he always felt he was luo trapped in a luhya body.

“It has to be his ability to tell captivating stories and easily endearing to people that made him thrive as a marketer”, he noted.

At the national and international stage, he made a mark in the Sevens circuit. He made a total of 57 appearances on the Sevens World Series, managing 28 tries and is ranked 21st overall amongst Kenya’s all time try scorers on the World Series.

Allan played at the 2005 Rugby World Cup Sevens in Hong Kong and the 2006 Commonwealth Games in Melbourne, Australia.

His club rugby life started at the defunct military side Ulinzi, where they won back to back National Sevens Circuit titles in 2002 and 2003. It is his pace that helped him stand out, earning a selection to the national sevens squad, Shujaa.

Upon Ulinzi’s disbandment, he moved to Kenya Harlequin at the close of the 2004 season and featured in the Quins squads that won the National Sevens Circuit title in 2005 and 2006 and the 2008 Kenya Cup league title.

Understandably, he was once described by Fijian sevens legend Waisale Serevi as one of the fastest players he ever saw.

World Rugby website records that he played 57 matches, scoring 142 points, an average of 2.49 per match. He scored 28 tries, had three yellow cards but never had a red card.

Away from rugby, he undertook his studies in International Business Administration Degree at the United States International University where he majored in marketing and finance.

His career since 2004 has been in business development, starting out at Ruck and Maul as a brand executive here he would work for close to two years. He moved on to battery manufacturers Chloride Exide as a business executive before joining MediaMax Limited as an agency sales manager.

It is at Royal Media Services where he lasted his longest, eight years as Business Manager. Hot 96 was his last station.

“He had a way with people”, remarked Stephen Musyoka, a rugby fanatic.

Willis Raburu, a talk show Host at Hot 96 and Citizen TV presenter while eulogizing him said he was “always the life of the office”.

His death, by ramming into a stalled trailer on Mombasa road, adds salt into grim statistics by the National Transport and Safety Authority (NTSA) as a road having accounted for a high number of accidents since January.

But he may not have died, should he have secured a lift to Kakamega. On Friday evening at 5pm, he phoned Senator Cleophas Malala to request for a lift to Kakamega. The two had been at Mumias Boys Primary School and USIU, and being from Kakamega, were good friends.

Malala had come to attend Senate special sitting to impeach Deputy Speaker Kithure Kindiki and was returning back to Kakamega the same night. Unfortunately his car was full and he missed the lift. The Senator’s entourage received the sad news on arrival in Kakamega.

He has left behind his wife, Lilian Muthama and two children.

When North Korea shocked Italy at the World Cup