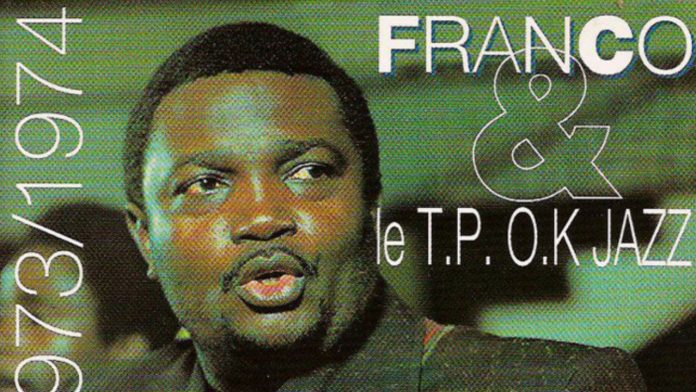 OK Jazz, later renamed TPOK Jazz (short for Tout Puissant Orchestre Kinshasa, “all-powerful Kinshasa orchestra”), was a Congolese rumba band from the Democratic Republic of the Congo established in 1956 and fronted by Franco. The group disbanded in 1993, but reformed in 1996.

Here are what some of the songs were about

Matata ya Mwasi na Mobali Esilaka Te (1974)
At the time, it made sense. Today, feminists would strangle Franco for this. It says problems of man and woman will never end in this world. It says men jubilated when they chased away the colonialists only to return home and find a more vicious master—woman—who keeps them working while owning only one pair of trouser.

Kinsiona (1974)
Bavon Marie Marie was Franco’s only brother and headlined the Negro Succes band. A virtuoso solo guitarist, Bavon died in a car crash in 1970. Kinsiona is a tribute to him. Kinsiona means ‘fact of being alone’ in Kikongo. Franco mourns his brother and says he is alone but people are accusing him of foul play (in Bavon’s death).

Mbanda Ekoti Kikumbi (1980)
A man is weary of the manner in which his rival has upped his game to take him down. He says his enemy is now going the extra mile to tarnish his reputation.

Mujinga (1981)
The song admonishes a man who keeps going out to tell his friends about his wife’s weaknesses. How she can’t cook well, what she does wrong etc. It is a woman who was being ‘tapped’ by the amorous husband who reports this to the wife.

Non (1983)
In 1978, Franco and his band members like Josky Kiambukuta were jailed for obscene songs, Hellene and Jackie. Out of jail, a woman rejected Franco’s advances and he wrote Non to hit at her. Josky was to be the lead vocalist but when he saw the lyrics, he fled. He said it was too strong and too soon after their stint behind bars. Franco turned to a new recruit Madilu, whose vocal prowess fitted the bill in the folklore. He also toned down on the lyric and came out with one that laments about marriage and the rejections and disappointments in that sacred institution. This song started the rise of Madilu in TPOK.

Ngungi (1983)
Franco put aside his differences with Michelino and Tabu Ley and recorded a full album that had this great song. Ngungi (not Ngugi) is a mosquito or parasite that sucks blood out of you. The song castigates such friends who depend on you, backstab you.

Kimpa Kisangameni (1983)
Done in Franco’s native Kikongo, it starts with heavy Mpundi Decca bass guitar (like it was with Jackie in 1978) punctuated with a mournful husky voice of Franco. Kimpa Kisangameni means charms planted on the roof of a house and Franco is telling his mother to see the charms that enemies have brought to kill him. He says his brother Bavon Marie Marie (died in 1970 in a car crash) was killed by sorcerer.

12600 Letters (1984)
Bandeko ya basi, as it is popularly known, balingaka basi ya bandeko mibali te mpo na nini? (Why do sisters-in-law harass their brothers’ wives?) Franco has 12,600 letters written by frustrated wives complaining about mistreatment at the hands of their in-laws.

Candidat Na Biso Mobutu (1984)
Franco had fallen out of Mobutu’s favour and his businesses back home were under threat. With elections approaching, he recorded an epic flattery. He said Mobutu is the only candidate Zaireans should pour into polling stations to vote for. The tragedy is that it is one of his best songs.

Tres Impoli (1984)
This song rebukes friends who over familiarize with others. Tres Impoli means very impolite or rude. Franco is rebuking a friend for being too rude and without manners, such as wanting to talk with bad breath, walking into people’s homes without knocking, even to their bedrooms.

Ndaya (1984)
This Mpudi Decca composition bears similar title to Mpongo Love’s song but are antithesis. Mpongo Love praises love and urges her man to stick to her like a belt to a trouser, but Decca is lamenting a heartbreak after his love marries another man.

Mario (1985)
Franco’s biggest hit, it tells of an educated man who prefers to wallow in aging wealthy women. This gigolo doesn’t want to apply for jobs. Mario is the story of a Portuguese man.

Celio (1986)
Composed by Franco who leaves the vocals to Malage de Lugendo and Djo Mpoyi as he sits to his mi-solo. A wife asks a woman going out with her husband why she is doing it, says she would give the said woman anything in life but Celio. The magic in the song is the tenor of Lugendo and Mpoyi.

Layile (1986)
In 1986, Franco introduced an elegant singer with a heavenly voice. Kamenga Koyabote, aka Jolie Deta, stayed with TPOK Jazz long enough to sing two songs: Massu and Layile. In the latter song, a woman says her rich husband bought her an air ticket to Paris and forced her on holiday so that he could stay behind alone with his mistresses. She says the man has betrayed her heart. Layile was a hit and Jolie Deta became a sensational item in Congo, so much to the chagrin of Franco, who lamented that women didn’t know how to handle fame. She lives in Switzerland and does gospel music.

Attention na Sida (1987)
An intense 15 minutes. After a UN summit asked African governments to make deliberate efforts to create awareness of HIV/Aids scourge, Mobutu returned home with an assignment for Franco. ‘Beware of Aids’ is done in French and implores the people to stop reckless lifestyle.

Les On-Dit (1987)
Under the Choc label, Franco introduced Nana Akumu and Baniel Bambo to the band in 1987. In Les On-Dit, a woman is cautioning a friend to stop spreading rumours that she is dating her husband. She says the husband follows her everywhere; to salon, pays for her hair treatment but she has no interest in him.

Sadou (1987)
Madilu’s magic wafts in this song as a man goes triumphantly nostalgic after meeting women who spent their youth ridiculing his love for Sadou. They used to ask Sadou to leave him, they brought men to lure her away, they said he was useless since his job was worthless. But few years down the road, they have lost their youthfulness and he has become successful and now they envy Sadou who persevered in the marriage.

Le Rumeurs (1988)
Franco was very angry over rumours about his ill-health that he hit out with Le Rumeurs. Many say it was aimed at Madilu whom Franco singled out for spreading rumours that he had HIV.

Odongo cooperation
Also in Kikongo. Odongo means unity, cooperation. After rumours that Sam Mangwana had left TPOK, he did the song with Franco to tell fans that they were still together. Last year, Dizzy Mandjeku, a TPOK soloist, said in a WhatsApp response that the title track was inspired by a friend of Franco and Mangwana in Angola.

Kabaselle en Memoriam
In the same album is laidback with a flowing bass guitar taking the lead. Franco and Ley pay tribute to Kabaselle, aka Grand Kalle, the father of modern rumba. Nazua nganga wapi ye, Asomela ngai liwa ya Kabaselle (‘Where do I get a sorcerer to reverse the death of Kabasele?’)

Last album
Franco’s last album, For Ever, was done with Sam Mangwana in 1989. The album sleeve had a picture of a frail Franco.
On Sept 22, 1989, Franco gave the world his last performance. He left hospital in Belgian for the show in the Netherlands. He struggled on stage.

The last song he performed was Chacun Pour Soir. He passed on two weeks later on October 12, 1989.

Five tips on how to revv up vacation rental sales