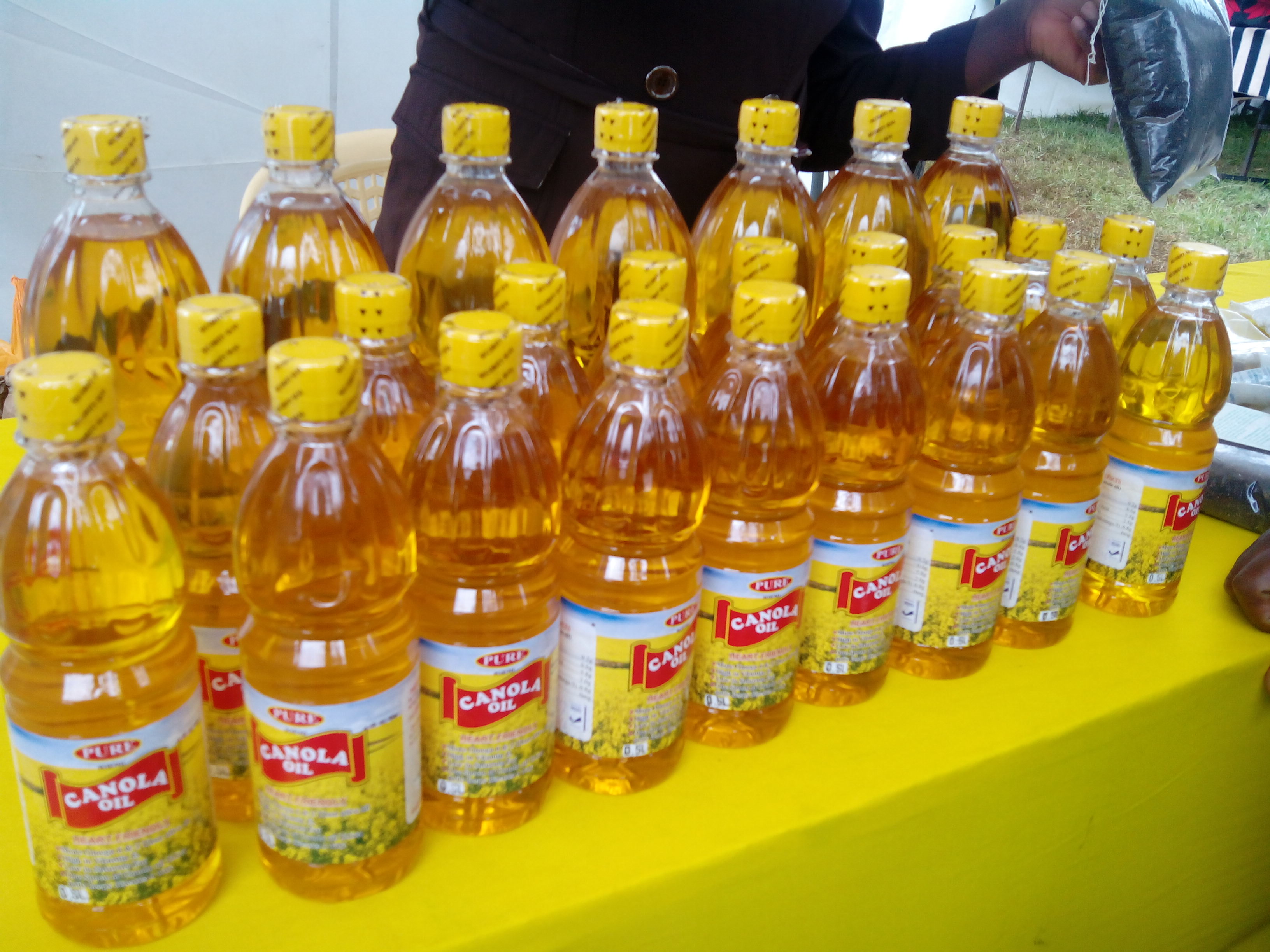 Within the maze of business stands at this year’s manufacturing expo, stood one, with attractive bottles of yellow canola oil, neatly displayed on a table. The next thing that caught ones eye at the stand was a smile from one, David Kimondo, the proprietor of Kieni Canola oil; the wonder oil bringing health back to the masses.

Canola oil is gotten from crushed seeds of the Canola plant (mustard plant), a plant native to Canada mostly grown as a rotation crop to wheat. The plant does well between 1800m-2400m above sea level. The oil is rich in vitamin E, Omega 3, 6 and 9 fats-mostly found in fish and can act as an alternative to cod liver oil (which usually costs an arm and a leg).

“Canola oil helps manage diabetes, arthritis, ulcers, common colds, lowers blood cholesterol, boosts brain development in children and helps maintain a smooth natural skin, says Mr. Kimondo.”  With this, he picks my curiosity, but before I could ask more, one of the delegates at the expo comes in whispering to Mr. Kimondo, “it really helped me, I had prevalent ulcers due to (she mentions a mouthful scientific term that I later find to be….) and now it’s gone.”

At this point, I am still skeptical as I have already seen in the past, several products hailed as wonders of health, so I prod more to find out what inspired him to start this particular venture. He says,

“I first encountered Canola in a farm belonging to a Canadian who was extracting oil and selling it locally. Moreover, I was inspired because, everywhere I go I find sick people. In Nyeri where its cold, arthritis patients are told it is aggravated by the cold, while in Kisumu, where it is hot, arthritis patients still suffer. Research had already been done, I just had to bring it to people and create awareness.”

On the most challenging aspect of his journey to commercializing Canola oil, he says, “It’s hard to get people to accept a new product, especially something they have never seen before. On the other hand, once you do something different from everyone else, heads turn your way; I have received plenty of media attention because of this uniqueness.”

Mr. David Kimondo is not a stranger to innovation and pioneering, he says he was the first person in Kenya to make a 12 volts iron box in 2004. In 2006, he made a rechargeable torch and was among the first in the business of installing home solar panels. Widespread electricity penetration in the Kibaki era reduced his market, and he opted out of the business.

Under the theme ‘Driving Local Competitiveness to Make Kenya a Manufacturing Hub for Africa’, the Summit and Expo aims to create awareness of locally manufactured products, promote business partnerships and identify the constraints facing the sector’s growth.

As we speak in his display stand, visitors keep interrupting our interview but as a result, I get a chance to observe how he interacts with customers.

Mr. Kimondo is a natural salesman, I watch him talk to a curious visitor, new to Canola oil. He mentions the benefits of the oil while angling for something to connect with the man. “You can cook with it, drink it, helps with diabetes, arthritis, even ‘kama mzee, kazi imelala kidogo inishtua haraka’ (a polite way of saying it boosts libido).” When the visitor reacts with laughter, I know he has him.

Furthermore, I overhear him tell a customer that their product is not in supermarkets, I ask him about it. He says that although supermarkets seem lucrative they don’t pay promptly, withholding payments up to three months, which is a cash flow nightmare. He prefers small shops that are widespread, pay quicker and have less suppliers’ requirements. This is advice worth considering if you are a new player in manufacturing.

Mr. Kimondo’s base of operation is a cottage industry in Mweiga, Nyeri County where he has machines extracting, filtering and sealing the oil in half and one-litre bottles, which he sells for sh300 and sh500 respectively.

I walk away from the interview impressed at the lengths at which human beings go to actualize their visions. The ease, with which entrepreneurs are willing to go against the grain, is a testament to the hope that lies in a nation, Kenya being no exception.