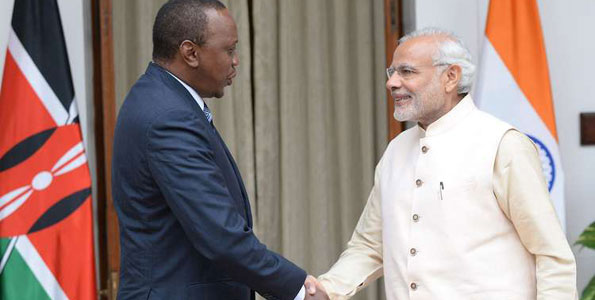 The Indian Prime Minister Narendra Modi who arrived in the country yesterday is set to hold one-on-one bilateral talks with President Uhuru Kenyatta at State House, Nairobi today before leaving for India.

Mr Modi who flew in from Tanzania is in his last leg of a four-nation African tour that began Thursday in Mozambique where he steered bilateral talks with President Filipe Nyusi. He flew to South Africa afterwards for a talk with President Jacob Zuma.

His visit to Kenya is expected make progress in formalizing major trade, commercial and healthcare deals that will see the country importing more from India than exporting. It is also expected that the visit will bring to fruition ICT corporations between the two countries.

Unlike last week’s traffic drama caused by the Israeli Prime Minister Benjamin Netanyahu’s visit, the State house Spokesman Manoah Esipisu promised that there would be no major disruptions with the presence of Mr Modi in the country.

Mr Esipisu was speaking during a media briefing at State house, Sunday.

“We do not anticipate major disruptions but the police will be deployed when need be,” said Mr Esipisu.

“We are looking forward for a dynamic outcome from the meeting that will bind the ties that brings us together.”

Mr Esipisu confirmed that a revised Double Taxation Avoidance Agreement will be signed during the visit, as will a further agreement between India’s Bureau of Indian Standards and the country’s own.

Upon his 19 gun salute and formal reception, it is also expected that the inking of a cancer unit deal to be financed by the Indian government tops his agenda.

Mr Esipisu, the Indian PM’s programme will also include the ground-breaking ceremony for a cancer hospital.

“The government of India has committed to set up a cancer hospital in Kenya where it will provide doctors and equipment. Discussions on the health cooperation, which covers this project is being negotiated by both sides,” Mr Esipisu said.

“We expect to make progress in formalising and deepening that cooperation, for the mutual benefit of both our peoples.”

If the deal to build the cancer unit in the country is signed and sealed, it will save the country extra earnings as well as patients’ hassle to seek for treatment abroad, placing Kenya as a medical tourist destination in the region.

Medical tourism in the region is ripe with Kenya placed as the top destination.

The Aga Khan University Hospital (AKUH) in Nairobi last week announced that it is set to offer free radiotherapy treatment to over 400 Ugandan cancer patients while the Ugandan government works to re-establish its radiation therapy capacity.

The deal was formalized through a memorandum of understanding with the Uganda Cancer Institute last week.

AKUH- Patient Welfare Programme, which is funded by the hospital and augmented by individual and corporate donors and provides subsidized medical care to needy patients, will cater for the treatment.

AKUH chief executive, Shawn Bolouki said that they are committed to increasing access to specialized care to those in need through public private partnerships with other institutions.

“The citizens of Uganda do not have to travel overseas to access high quality healthcare as these services are available here in our region,” said Mr Bolouki.

India, amidst the Chinese influence, has been seeking to increase its footprints on the continent with Mr Modi’s visit being a follow-up to the India-Africa Summit in October last year during which the Asian nation pledged $10 billion (Sh1 trillion) in soft loans over the next 10 years and $600 million (Sh60 billion) in grant aid to the continent. President Kenyatta was in attendance.

After Mr Modi’s visit, the country’s diplomatic calendar still looks tight. From President Barrack Obama, Pope Francis, Mr Netanyahu, and now Mr Modi – the United Nations Conference on Trade and Development (UNCTAD) conference, which will be concurrent with the AU meeting to be held in Rwanda is coming up next Sunday.

Over 6,000 delegates, among them President Museveni of Uganda, President Hage Geingob of Namibia, and Secretary General Ban Ki Moon are expected to attend.