As Kenyans took issues with the receivership of Chase Bank, Jimnah Mbaru took a swipe at Kenyans online tweeting that

“The problems facing Chase Bank has brought to the surface the enormous hostility towards indigenous capitalism by Kenyans.” 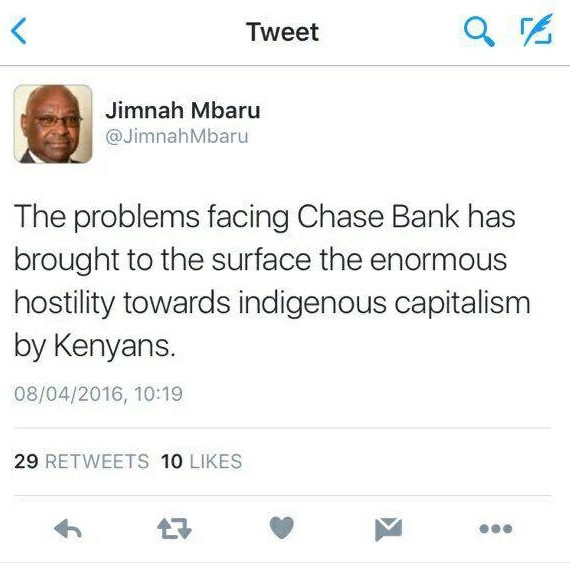 A quick response from Kenyans criticizing him led him to delete is and write a new one.

I also strongly condemn Directors of banks who recklessly and illegally lend themselves depositors money without concern of banks stability.

Under the umbrella Jimba Group, Jimnah Mbaru had Jimba Credit, Union Savings Bank, and Kenya Savings & Mortgages. All the three collapsed and today known as Consolidated Bank in 1989.The investment guru still feels he was snatched off his investments but the reasons for the failure are what Kenyans are now acquainted off

He was the founder and chairman of all the three banks, meaning he actively oversaw the management and leadership of the collapsed financial institutions. The banks did not last more than 10 years as he had founded them in 1980.

The Dyer & Blair Investment Bank Chairman spoke what is in his heart. Regardless of the fact that he deleted it, the truth about what he feels is clear. Jimnah is against due diligence and integrity entrusted to financial institutions by innocent, hard working Kenyans.

He will also learn and so do every internet user that the internet does not forget. He quickly deleted the post but someone had already taken a screenshot of it.

IMPACC to invest up to $150,000 in social businesses in Africa