In a paid up advertisement in the newspapers, BIDCO CEO Vimalkumar Bhimji Shah wants the defendants to appear before Justice Joseph Sergon on 10th September to answer to the charges of defamation. In the meantime, the defendants are required to remove the defamatory statements on their online platforms pending hearing and determination of the suit. 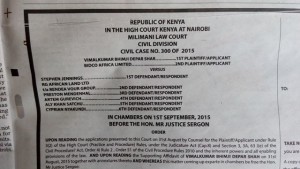 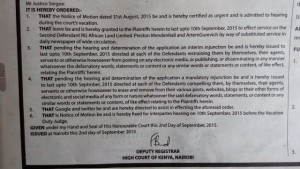 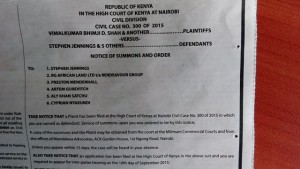 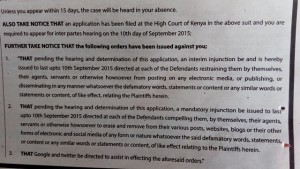 Stephen Jennings is a New Zealand businessman and founder and CEO of Rendea Vous Group, a Venture Capital & Private Equity firm. Artem Gurevich, the Chief of Staff of  Rendea Vous Group while Preston Mendenhal is a Reandeavour’s head of corporate affairs. The company has part ownership of Tatu City, that has never kicked off due to wrangles among its directors.

Just yesterday in court, Former CBK Governor Nahashon Nyagah moved to court seeking to stop his arrest over alleged fraudulent transfer of shares worth Sh5.3 billion from the Tatu City project. Police have been investigating the matter and in court, Justice Mumbi Ngugi granted the temporary order stopping the police from arresting Mr Nyagah until September 21 when she will hear the case.

For Cyprian Nyakundi, he posted on his blog and tweets about how the plaintiffs have oppressed Ugandans and alleged other human rights violations against Kenyans in its factory. In a series of 20 posts on his blog www.cnyakundi.com he made disparaging remarks that could hurt the plaintiffs name and negatively affect its profits. In addition, a series of posts on Twitter under the hashtags #BIDCOAreLandGrabbers, #StopFundingBIDCO, #LettertoVimal and BIDCOExposed Nyakundi leads Kenyans in casting aspersions on BIDCO’s dealings.

A few weeks ago, Nyakundi was involved in an extortion claim with another blogger Christian Dela. In a leaked audio recording with head of BIDCO communications team, Nyakundi asks for sh50M to delete all tweets and posts and also clarify that BIDCO are not frauds as he had alleged. It is further alleged that for the posts he made, Nyakundi was paid sh8000 to defame BIDCO.

It is hoped that sooner, Tatu City wrangles, all before various courts and in different stages will be resolved soon to allow for the real estate company to realize its ambitions.

This defamation case is not isolated. In recent weeks, Nyakundi was charged by Safaricom for defaming them, spotlighting the increasing part bloggers are playing or accused of bringing the name of companies to disrepute. These cases will help grow online jurisprudence on defamation and perhaps limit them in future.